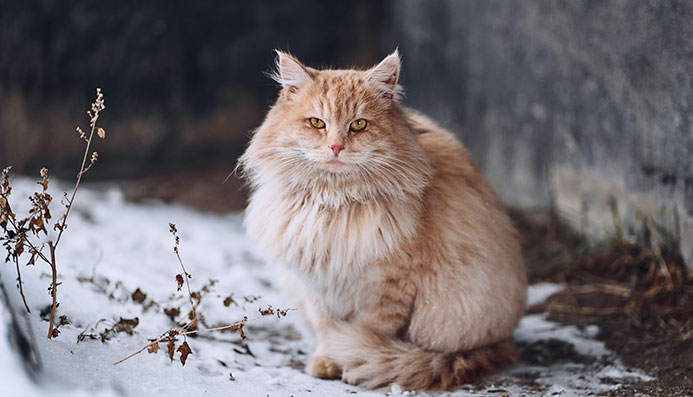 Movies About Cats: Who doesn’t love cute furry cats? Some people may be afraid of their sharp pawn but not you and me. If you have clicked on this article, you know you are a cat lover. It doesn’t matter why you love them, you just keep scrolling and watching the endless loop of funny cat videos on Instagram and YouTube. You find cat memes funny and share these gifs and members all day.

We are pretty the same as we both adore these cute soft kittens. So what could be a better way to get the SMA amazing experience while watching the movie as we get watching funny cat videos. So, we have gathered here the best cat-themed movies, and the best cat movies (which includes movies about cats, featuring cats, and their funny and cute reactions.

Who could be a better companion to the strongest avenger Carol Danvers (Captain Marvel), than a lovely cat? Although, the fuzzy orange cat is not actually a cat. It is a flerken, an alien with monstrous tentacles in its stomach, but it sure looks like a cat. Goose is a significant member of the Captain Marvel movie and one of the few living things that possessed the infinity stone, Tesseract.

Also, Goose is responsible. We only see Nick Fury with an eye patch, as Goose scratched him over his eye. Goose’s rugged, fuzzy exterior with a helpful nature during the worst time make her a spot on the list of best movies about cats.

It is a true story based on the adaptation of the best-selling book, where a homeless man is given a second chance. It follows the story of a homeless, heroin addict James Bowen, (Luke Treadaway), who gets a chance to turn his life around and a doughy ginger cat helps him. Bob the cat gets attached to James when he takes care of her, and always follows him around.

Eventually drawing more crowds of people, making James more wealthy.
As their bond grows, you can always find Bob perched on James’ shoulder. Director made an exceptional example, where the audience can see Bob always keeps supporting him under highs and lows.
It is a cute sweet pet love story and every pet lover can sympathize with it. If you have a cat or are going to get one, watch this movie with her and enjoy the brilliant aura of kindred spirit Bob.

“That’s the cutest cat I’ve ever seen!”
You may have heard this quote in an internet meme or see cats gone crazy in funny videos. But you may have never seen two adults who can do anything for their beloved kitten. Keanu( kitten) is the most beloved cat and anyone who see her, the first reaction is how adorable and cute the kitten is. We all love our pets and can go to save our pets. In this pet-loving comedic film, we saw two guys Rell and Clarence who suddenly lost their kitten Keanu, and eager to find it.

This includes posing as drug dealers and taking down the cruelest gang in the city and their gang leader Cheddar who has acquired Keanu.
Director Peter Alencio and writers Peele and Alex Rubens brought this amazing comedic duo of all time, from vicious killer to kitten kissing softies, to cowards man getting courage into saving their beloved kitten and becoming the ultimate Kitten rescuing heroes.

Also Read:Entrepreneur Movies You Should Watch for Inspiration

Cat From Breakfast at Tiffany’s

In the iconic film Breakfast at Tiffany’s, we all loved the cute fragile cat and seeing the cat giving the massage to Holly Golightly (Audrey Hepburn) get the audience burst into laughter.

Although the movie isn’t a good pet lover movie, the car has surely the important characters in the movie. In the film, Audrey represents the cat, and named Cat was described as a “poor slob without a name”.
Although in real life the cat is called Orangey — he was also quite the kitty celebrity. Back in the day, there were few feline characters and at the top of the list, we have our Orangey.

The movie follows the story of a socialite and a struggling writer, their journey through getting madly in love. This movie raised a lot of questions as according to Audrey, the worst disrespectful thing she has ever done is tossing the cat from the cab in the pouring rain.
But it was best for Orange as he ended up winning his second Patsy award — the animal equivalent of an Oscar. To this day, the only cat to have received 2 Patsy awards is none other than Orange.

The greatest action movies of all time include one of the dangerous characters: a cat. In the film, Alien we get to know how fast a freaking cat is and it is hard for a xenomorph to kill.

The one and only Jonesy, the orange cat, and Sigourney Weaver’s Ellen Ripely was the lone survivor of the alien attack on the USCSS Nostromo in Ridley Scott’s Alien (1979). In the Alien movie, Jonesy has only one task, look cute while killing any vermin on the Nostromo.
If you have thought of the greatest catfight ever in history, the first spot goes to Jonesy in Alien, where it was faced with Eight-foot tall Xenomorphs.

Jonesy doesn’t kill a Xenomorph, but it kept the poor beef safe when a Xenomorph dragged him into the air dent to eat him alive. The great action cat scene you could have watched in your entire history. Jonesy also makes a guest appearance in the movie’s sequel, and it is the greatest cameos of all time.

Cat from That Darn Cat

Fighting could be dangerous and it is only good if you are a boxing champion. This situation happens to one of the girls and now there is nothing she can do. But as smart as Lizzie, she managed to get ahold of the cat and place a watch with “HEll” scribbled on it. She couldn’t write “HELP” as the cat could have easily been caught by the kidnappers.

The cat acts as a god for Lieezie and the means to rescue and the cat helps the FBI to safely rescue Lizzie. Jonesy is one of the great rescuers of all time and it comes with the title hero-kitten.

Puss From Puss in Boots

The greatest action star is Puss a Cat, who wears a hat and boots and is a master in sword fighting. If you have watched Shrek 2 and remember a sweet cute but dangerous cat, Puss. You are in for a treat, this film is the prequel of the franchise and tells about the journey of Puss.

The film follows the route where Puss wants to restore his lost honor as Humpty tricked Puss into helping commit a bank robbery in his hometown of San Ricardo. From that day Puss was registered as Wanted and lost all his respect in the city.

To restore his dignity, he fights against the most ruthless criminals Jack and Jill and can get ahold of the magical beans they possess. The film also has a love interest between Puss and Kitty( hitmen hired to kill Puss) and one of the dangerous action sequences.

It is equipped with dance fights and instead of using swords, the fighters have to show the dance skills to defeat the enemy. The film was a massive hit at the box office and was well appreciated by the audience.

It is a sweet story about a cat Victoria, who is abandoned by her owners and now is taken under the wing of the gang of street cats known as “Jellicle cats”. It is one of the movies to watch when you are lonely, looking for a musical theme, and love TaylorSwift and Andrea Lloyd Webber songs.

This film shows not a cat but a hybrid of the cats or cat-human hybrid to be exact. Some people may find it funny or silly, watching grown humans crawling around in furry suits pretending to be cats.

Pec Deck Alternative: Pec deck machines are one of the most used gym equipment to build chest muscles. This machine helps you train chest...

If you think animated movies are just for kids, We couldn't disagree more - movies the only purpose is for entertainment no matter if...

These Are the Greatest 10 Teen Dramas Series list Ever. The Best TV Shows for Teenagers capture and relive the high school experience for...

Lower back pain is the normal issue that most people face in the gym or in normal life. But if you do the gym,...